The diving at Sipadan is mostly for intermediate – advanced divers, as there are often strong currents and  choppy sea conditions.

Most of the diving in Sipadan is combination of wall and drift diving. The walls are covered with hard corals, soft corals, gorgonians, sponges etc. You can see more turtles on one dive here than in a lifetime of diving anywhere else. Divers may also get to see huge resident school of barracudas, which make beautiful circling patterns on top of the reef.

There are about 13 dive sites in Sipadan, ranging from 5 – 40mtrs. Visibility is usually around 10 – 30 mtrs, and water temperature 26 – 30ºC. With good sea conditions, it takes about 20 minutes from Mabul or Kapalai to reach Sipadan by boat.

Mabul and Kapalai Islands are  heaven for studying the micro aspects of marine life and guarantees hours of fascinating fish watching with ample opportunities for photography.

With wall, drift diving, drop-offs and a diversity of marine life that includes numerous big fish encounters, Sipadan is acknowledged as a top dive destination alongside the Galapagos Islands and Truk.

Barracuda Point
One of the most treasured spots at Sipadan Island is the aptly named Barracuda Point. Here you can find yourself in the middle of a swirling vortex of chevron or blacktail barracuda. Grey reef sharks are always patrolling the perimeter, plus keep an eye out for herds of bumphead parrotfish and turtles in every nook and cranny.

Coral Garden
This site is a haven for the underwater photographer. The health and diversity of the coral growth on view here is sensational and it is surrounded by almost every species in Sipadan’s waters. Clown and titan triggerfish are plentiful, as are giant wrasse. You can observe the turtles feeding on the edges and encounter feather stars at every turn.

The Drop Off
This world-renowned beach dive features a 600m drop just metres from the beach. Here you’ll find several hundred jacks while bumpheaded parrotfish charge around. Beneath the circling fish are whitetip sharks, grey reef sharks and green turtles. A great night dive spot as every nook and cranny in the wall is crammed with crabs, shrimp nocturnal sub-aquatic wonders.

The Hanging Gardens
This is a wall dive beginning with a drop-off just over a metre from the surface, descending gradually to a terrace at about 70 metres, then plunging into an abyss. The terraces are filled with a proliferation of dendronephythya alcyonarians in various pastel colours of lemon, lavender and rose overflowing down to the next level, and are named for the famed Hanging Gardens of Babylon, one of the wonders of the ancient World.

Among the alcyonarians and gorgonian fans which adorn the wall you’ll find various microlife nestling in the branches and polyps.

Within the cavities and crevices on the wallare colonies of sweetlips, gobies, hawkfish, emperor angelfish, moray eels and coral groupers lurking around. Green turtles and imbricate turtles are commonly found here and don’t be surprised if you come across dozens of ribbontail stingrays as well.

Towards the open Sipadan sea you can find schools of scalloped hammerhed sharks, grey reef sharks, and occasionally the extremely rare thresher shark, or fox shark.

Sipadan Midreef
A colourful drift dive along the vertical wall forms the Sipidan Midreef, full of soft corals, navy knotted sea fans and orange gorgonian fans that hang from ledges. Pygmy gobies and whip gobies are in abundance here. Forsters hawkfish are often seen hanging out, resting motionless on the small sponges. Five-lined cardinalfish and harlequin sweetlips move furtively under the many ledges and overhangs. Sulu fangblennies, known only to northern Borneo and the Sulu Archipelago, form aggregations among the gorgonians.

Midreef can have quite strong currents, which bring in high densities of fish life. Large schools of moorish idols, redtooth triggerfish, unicornfish and bannerfish race along the wall. Smaller schools of round batfish and Napolean wrasse are regular visitors too.

The 6mtr wide hard coral flats on top of the reef are crammed with small stubbly table corals and porites corals, the staple diet for packs of bumphead parrotfish.

South Point
A pelagic lovers dream dive! South Point is one of the most likely sites to find rare sharks such as hammerhead and thresher sharks, both of which tend to stay at depths of 40+ metres.

Enormous bumphead parrotfish grind and munching the South Point corals for the algae. At 85kg and easily more than 1mtr long, they have humped and scarred heads, small eyes, and jutting teeth-like fused beaks.

On the face of the wall, take a close look into the numerous cervices, balconies, cavities and protruding vaults to find a profusion of marine life which have made their home there. Here are red seawhip corals, black corals, barrel sponges and a plethora of reef fish. Watch out for groupers, nudibranchs, angelfish, gobies, grunts, shrimps and triggerfish. The coral formations here have grown to huge sizes, with the black corals bushing out to two metres wide.

About 30 metres away from the wall towards the open sea you are likely to see giant manta rays, scalloped hammerhead sharks, rare fox sharks and leopard sharks.

Turtle Cavern
TurtleSipadan is famous for its population of green turtles and the smaller hawksbill turtles. Turtle cavern is possibly their mausoleum where they came to die, or maybe they became lost in the caverns at night and drowned. The entrance to the cavern located at about 18 m and inside you will see the skeletons of many turtles. Deeper penetration of the system reveals the shoals of fish specifically adapted to the low light environment.

Whitetip Avenue
A coral reef located at a shallow depth before plunging into a 600 metre vertical abyss, at Whitetip Avenue you can look forward to numerous encounters with schools of gentle whitetip reef sharks.

The open sea on the other side of the wall holds encounters with pelagics like the grey reef shark, and naturally, whitetip reef sharks.

Its great for muck diving. Muck diving, a term used to describe limited visibility dives at shallow sites with usually sandy bottoms focuses on encounters with unusual little critters. Here is a macro diving paradise where you will be able to find rare, and often bizarre, macroworld inhabitants.

Crocodile Avenue
For macro-lovers this is a haven of discovery. To dive here is to cover a gentle sandy slope peppered with little areas of activity. With a pair of sharp eyes you will find a seahorse, or more. Patches of weed and stringy areas often harbour at least one seahorse, clinging on with its prehensile tail.

Crocodilefish – photo by Sheldon Hey – Dive the WorldOther joys include the eponymous crocodilefish lying in wait on the sandy floor, its large flat snout resting just above the ground, and the occasional ghost pipefish.

Equally popular as a night dive, nocturnal outings will yield excellent rewards with sightings including cuttlefish, nudibranchs and crabs all making their way into the beam of your flashlight

Froggy Lair
FrogfishDiehard macro divers come back from Froggy Lair raving about unusual finds. Several frogfish are often spotted well camouflaged as they sit in wait ready for the fastest lethal strike in the natural world. Cowries can be seen both in the daytime as well as at night.

NudibranchThere are any number of species of nudibranchs in splashes of colour that are extraordinarily pretty as well as some fabulously ornate ghost pipefish and the flamboyant cuttlefish.

Eel Garden
On the sandy seabed at a depth of about 20 metres onwards, you’ll spot loads of small lairs and tunnels. These are home to shy colourful gobies of various species, blue ribbon eels swaying around with gaping mouths and cleaning shrimp.

There is a large number of garden eels which rise out of the sandy seabed. From a distance they stand very tall swaying with the water and looking like a field of stalks. Within the small groups of coral, exploration will yield sightings of the rare lemon coloured moray, and frogfish in colours of blue, rose red and black.

As you work your way up, you’ll come upon the reef at a depth of between 2 and 15 metres. Along with wrasse and damselfish, is a very unusual creature, the gigantic mantis shrimp from the genus odontodactylus. This predatory crustacean literally jumps out of its lair (holes on the sandy seabed) to grab passing fish for dinner.

The dive location of Sipadan is a year-round destination. Overall conditions are best between April-December. July and August are often described as the best months with visibility up to 40m in optimal conditions.

Sipadan is located off the east coast of Sabah, Malaysia’s eastern most state and lies on the north-eastern corner of Borneo.
We can arrange a taxi/shuttle/boat transfer to the resort.

Stunning accommodation around this dive location. Includes water-village resorts, island bungalows and the option to cruise aboard a Liveaboard. The accommodation in this area of Malaysia provides Deluxe to Standard room types. 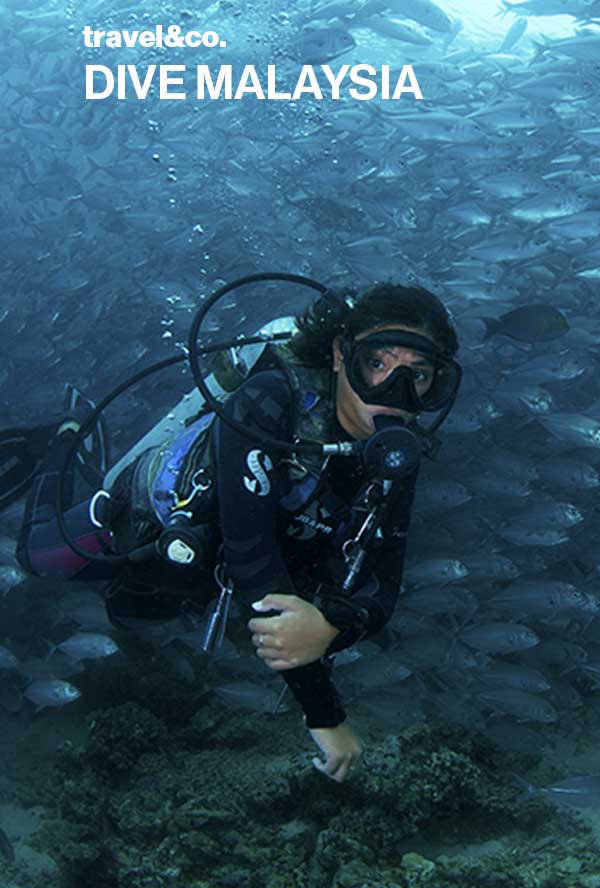 Download our Quick Guide to Dive Malaysia
Take a look our quick guide to the best dive locations in Malaysia. Enter your details below to download your copy now
Start planning your Dive Experience