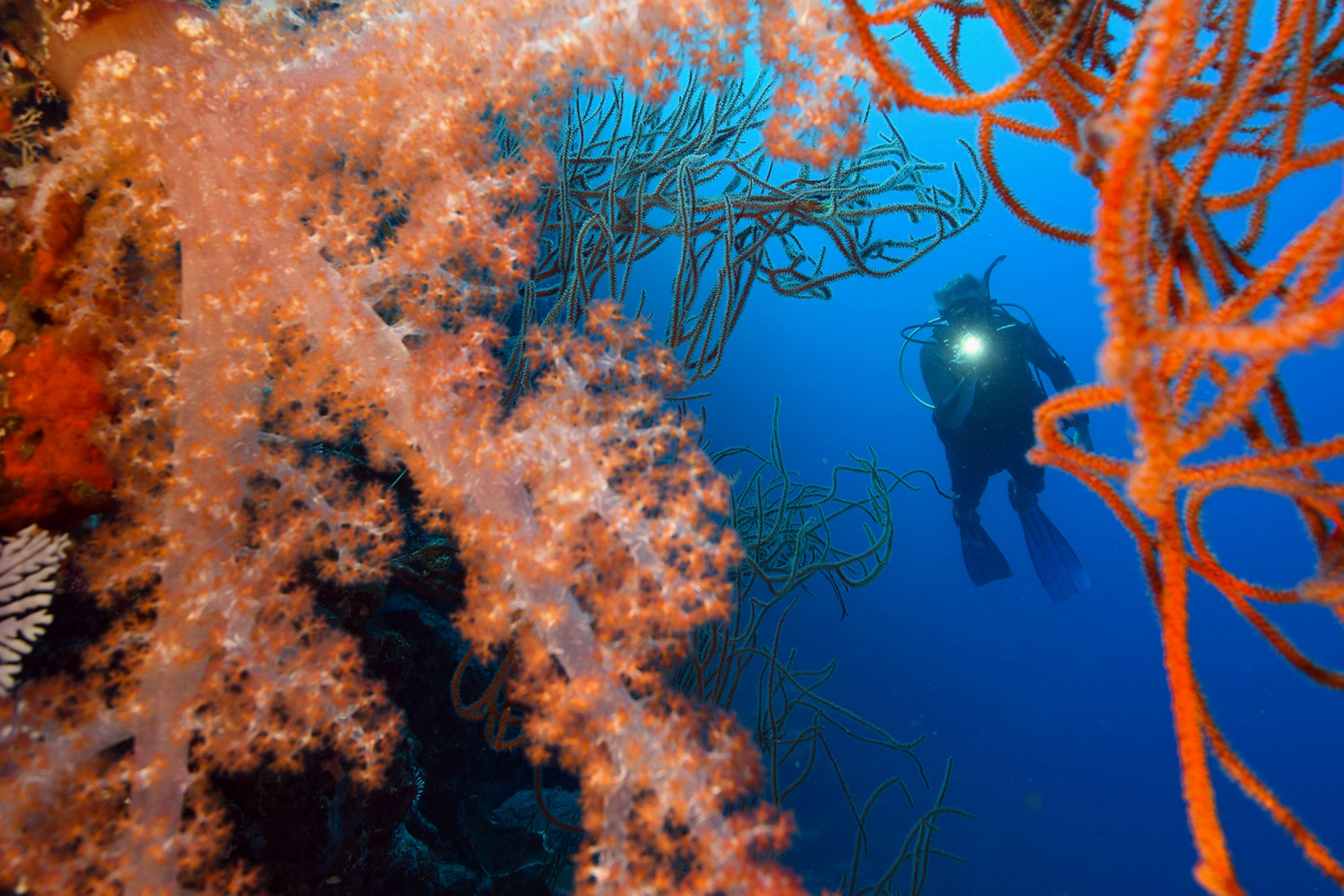 Munda was an important military airfield during WW2 and there are war relics everywhere: in the bushes, on the beaches, in the water. There is great wreck diving available. Roviana Island, situated in the lagooon at Munda has a colourful history of headhunting, animist religion and tribal wars. On the hill behind the village lie the ruins of an ancient coral fortress protecting the stone dog-idol previously worshipped by the tribe. From Roviana Island, a variety of excursions by motor canoe can be undertaken, from snorkelling and fishing to sightseeing: war relics, waterfalls, bat caves, and cultural sites such as the skull islands where the ‘trophies’ of yesterday’s headhunters were stored.

Munda’s reefs are in pristine condition, with lush soft corals and gigantic sea fans.Visibility varies from 20 – 40+ metres. There are spectacular walls, dropping off to over 600 mtrs, teeming with real big fish action. Grey Reef, Black tip, and White tip sharks routinely patrol the reefs, and the occasional 5+ mtr Silvertips turn up regularly. Eagle rays, shoaling barracudas and other pelagic are also commonplace. Occasional encounters with Silkys, Oceanic White Tips, Silvertips and Scalloped Hammerheads (from December – June) add to the excitement.

In addition to the fantastic reefs and abundant marine life, Munda’s seabed is littered with wrecks from WWII that have evolved into gorgeous artificial reefs. There are 6 fighter planes, a Japanese Freigher and a small US dump site.

There is also a locally owned and run WWII museum with artifacts. It’s about a 40 minute walk out of town but well worth the stroll to see the real Solomons. Sports fields and villages are along the way and a cool piece of history.

Shark Point
Dropping off an incredible 600 metres into the Coral Sea, this site lives up to its name with sharks, huge schools of trevally, pelagics and eagle rays. It also features amazing gorgonian fans, pristine soft and whip corals and tonnes of colourful reef fish. A definite favourite in Solomon dive circles.

Custom Cave
The volcanic island of Ndokendoke has an amazing cave system that penetrates from a bush clad fresh water pool in the middle of the island. Reaching a depth of 35 metres you’re likely to encounter giant bumphead parrotfish, sharks and turtles and maybe a few of the elusive pygmy seahorses along the reef wall. This is one of the most exciting cave dives you’ll ever do!

Tomba-Tuni (aka Mushroom Island)
Perched on an extinct volcano, Tomba-Tuni is indeed mushroom shaped. The dive boat ties up to an overhanging tree and you roll over straight into 500m+ of blue water. Overhangs carpeted with soft corals and gorgonians, outstanding visibility and big fish action make this a photographer’s dream.

Rainbow Passage
One of the most colourful dives in the Solomon’s, this site offers sharks, turtles and teeming fish life, plus an impressive array of corals (including the seldom seen “green coral trees”), gorgonians, sponges, invertebrates and the “Cabbage Patch”, and you have one of the most diverse coral gardens in the Pacific.

Casi Maru
This W.W.II Japanese freighter sank at her mooring along with a barge and another small boat, which now rest alongside her. Although only 45 metres long, Casi Maru is a great poke-around dive for wreck enthusiasts.

Haepe Pinnacle
Rising from the deep waters the coral mount attracts a wide variety of fish life. It is patrolled by numerous sharks, Kingfish, Barracuda and Trevally in addition to being home to many of the larger reef residents such as Bumphead Parrotfish and Maori Wrasse.

SBD Douglas Dive Bomber
This historical wreck lies intact in 12m, inhabited by plentiful marine life and is one of the best aircraft dives in the Solomon’s.

Diving in the Solomon Islands is great all year round with the peak between April-December. Water temperature ranges between 26-29ºC. Underwater visibility ranges between 15m through to 40m.

Munda is on the island of New Georgia in the Western Province of the Solomon Islands.
There are regular flights into Munda Airport from Honiara and we can arrange a taxi/shuttle/boat transfer to the resort.