A sprinkling of 83 tropical islands from volcanic beginnings, Vanuatu lies in the warm waters of the South Pacific. This diverse landscape not only features active volcanoes and tropical rain forests but boasts breath-taking jungle waterfalls, hot springs, untouched coral reefs and crystal clear waters with a variety of exotic marine life. Discovering Vanuatu is a unique and spectacular experience! 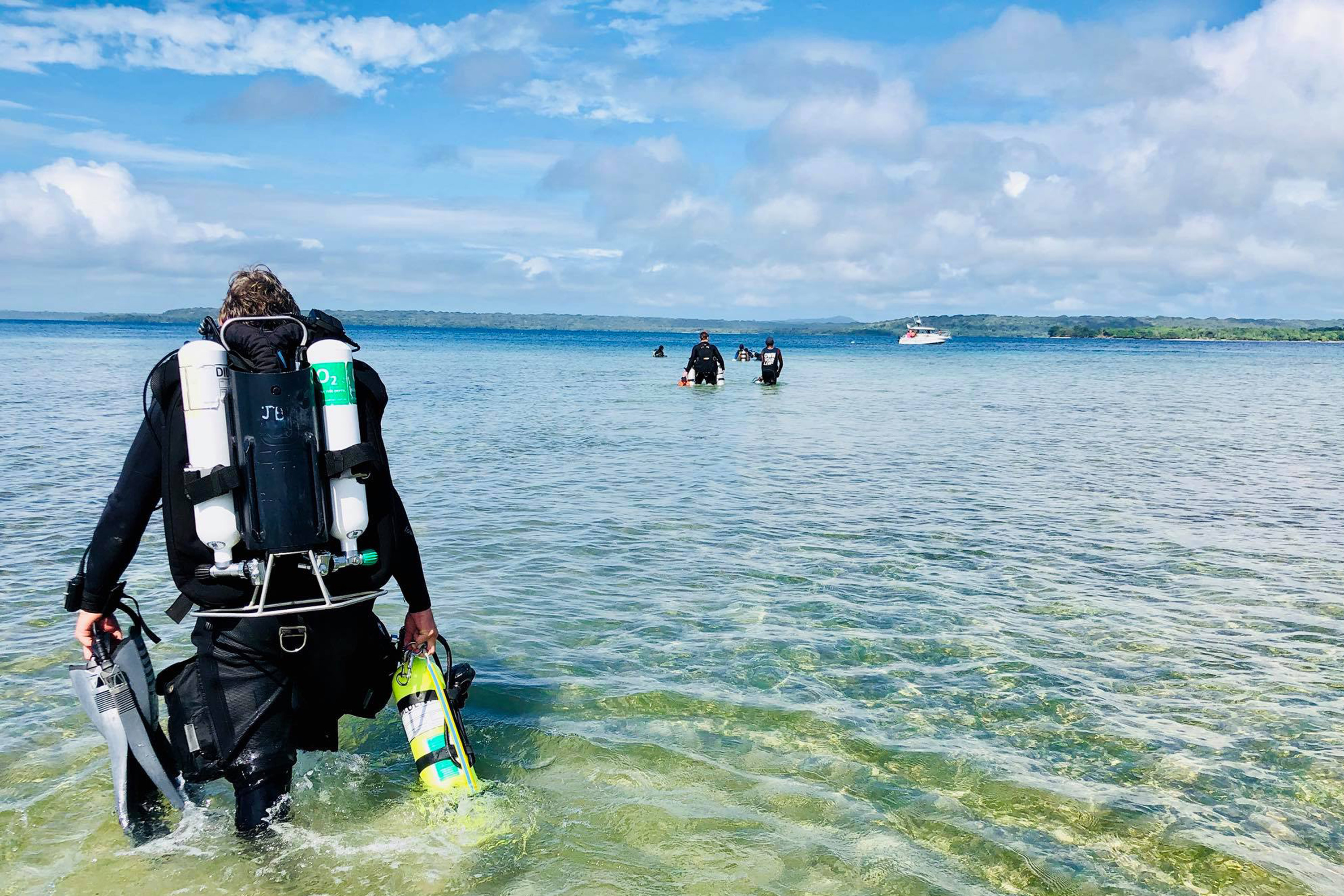 Santo
World class diving on offer in Santa including one of the the largest wreck dive in the world.

Vanuatu is recognised as one of the most culturally diverse countries in the world. There are small communities of French, British, Australian, new Zealand, Vietnamese, Chinese and other Pacific Island people living in harmony with the Ni-Vanuatu. Until 1980 Vanuatu, then known as the New Hebrides, was jointly administered by France and Britain as a “Condominium”.

Most of Vanuatu’s islands are lightly populated lush preserves of forest. Some have active volcanoes. All are surrounded by sea that is still clean. Of those inhabited, some such as Malekula and Ambrym are home to some of the South Pacific’s last truly primitive people in places not easily accessible.

Tanna, an hours flight south of Port Vila is the home of the “John Frum” Cargo Cult people, and is also the location for the “Toka” ritual dance. Here you can visit an active volcano, close up and personal.

On the island of Pentecost the land diving ritual takes place during April and May, with men jumping from towers constructed from bush materials to be brought up just short of the ground by vines tied to their legs.

It is believed the first settlers arrived in Vanuatu approx. 3,500 years ago, from New Guinea and the Solomon Islands by sea-going canoe.

The first European to discover these islands was the Spanish explorer, Captain Pedro Ferdinand De Quiros, in 1605. He named them “Tierra Australis del Espiritu Santo”, believing he had discovered the great southern continent. The island he landed on still bears the name Espiritu Santo.

In 1768, the next European to land here was the French explorer Louis Antoine de Bougainville. He put ashore on the islands of Aoba, Pentecost, and Maewo and named them the “Cyclades” after the Greek Islands and named the strait between the islands after himself.

In 1774, Captain James Cook sailed through the chain from north to south. He chartered many of the islands, gave many of them their present names, and renamed the archipelago the New Hebrides after the islands off Scotland, by which name it was known until Independence in 1980.

Following Cooks voyage the islands were visited by other French explorers and by 1895 both French and English subjects had settled here. In 1902 both nations appointed Resident Commissioners and in October 1906, Britain and France signed an agreement resolving their various claims to the country and making it a Condominium (the only one of its kind in the world) under joint management of both nations. It is estimated that through imported diseases brought to the country by missionaries, sandalwood traders and blackbirding etc. the population dropped from approx. 1,000,000 in 1800 to 45,000 in 1935.
WWII brought many changes to Vanuatu. The Americans moved in and took over in order to defend the Pacific against Japanese incursions. Ignoring British and French rule, they built their own infrastructure and buildings, successfully defended the country and befriended the locals. After the Japanese surrender in 1945, the Americans departed, leaving the Condominium struggling, and a new sense of independence in the islanders.

At the end of 1978, the Condominium arrangement ceased, elections were held in November 1979 and the nation became independent on July 30th, 1980. Vanuatu joined the United Nations on September 15th, 1981.

With a population of approximately 217,746 (from the Vanuatu Statistics Bureau 2005), Vanuatu boasts 113 distinct languages and innumerable dialects. This makes it one of the most culturally diverse countries on earth.

This amazing diversity is a result of 3,000 years of sporadic immigration from many Pacific countries. Although most settlers arrive from Melanesia, the larger built, lighter skinned Polynesians also settled in the islands. As with all nations and peoples, over millennia these different groups came into both peaceful and violent contact, sometimes intermarrying and sometimes having losing their cultural identity to a more dominant group.

Each successive wave of immigrants carried with them all the tools needed to live. Food crops, tree seedlings and their most important animal – the pig. This animal is probably the most significant aspect of life in Vanuatu, for it symbolises not simply a source of protein, it is the cornerstone of their ritual life, a token of wealth and power upon which entire societies are founded.

Over the millennia, natural boundaries; large open stretches of water, dense jungle and mountainous terrain, isolated many groups, even from the same ethnic origins, from each other. And isolation bred not just warfare, but quite different, sophisticated societies and political systems.

Unfortunately, when Europeans began trading in Vanuatu, they often used such warfare to their own advantage.

Today, there are four main cultural areas:
In the northern areas, there are two variations of a social and political society where men and women can ‘purchase’ positions of status. Wealth, in the form of mats and pigs – particularly pigs with rounded tusks – is not defined so much by how much an individual owns, but by demonstrating how much he can give away. Grade taking ceremonies, where large numbers of pigs are ritually killed and gifts given to members of an extended family, are elaborate affairs. Although the status of a person may be publicly displayed with, for example, certain body decorations, and a respect for their status, there is no real authority attached.

In the central areas, Polynesian type systems have predominated. Here, a hereditary chief is a powerful authority figure reigning over an entire class system, complete with nobles and commoners.

In the southern islands, particularly Tanna, titles or names are bestowed on certain men, which designate them as chiefs. This status can give them rights over land and even possessions of entire social groups. Women hold a very low status whereas in places like Ambae and the Shepherds, women can achieve the rank of Chief.

The situation is complicated even further by the introduction of more recent ‘religions’ such as the John Frumm’s (cargo cult) and the Half Halfs and various men’s secret societies, both on Tanna and to a lesser extent, on Santo and other islands.

However, throughout all the islands one thing remains constant, life is characterised by a constant cycle of ritual events. Every aspect of a person’s life is celebrated by extended families that number in the hundreds, filial relationships being remembered back in time through countless generations. Birth, circumcision and initiation, the achievement of status, marriage and death are a paramount feature of a community’s social life. With so many relatives, there seems always to be a significant ritual of some sort happening, or about to happen, somewhere.

With no written language, story telling, songs and dances are of paramount importance. Art, in it’s many forms, from body decorations and tattoos, to elaborate masks, hats and carvings are also a vital part of ritual celebrations and the social life of the village.

Similar to Australian Aboriginal stories of the dreamtime, and Maori legends of the past, ni-Vanuatu culture is also abundant in mythic legends. Natural formations, the presence and causes of volcanic eruptions and other natural disasters, are all imbibed with legends of significant cultural importance.

Even today, natural events are considered not to be the result of, say, plate tectonics or a chance passing of a cyclone, but events brought about by the actions of individuals who may have offended certain spirits. In the past, such beliefs caused animosity between villages and islands, to the extent that warfare often resulted (a classic example is the eruption of Ambrym volcano in 1913).

Naturally, traditional societies’ economies are based on produce from the land. Staple foods are mostly root crops; yam, taro and manioc. Seasonal fruits like breadfruit are important mainstays. In most areas a portion of the jungle is simply cleared to plant crops. However in places where there is plenty of water, taro is grown in complex terraces hand built from earth and rocks. As mentioned above, pigs are a mainstay of the economy not just as food but as a form of money and prestige.

A village’s economy plays a significant role not just in simple survival, but as part of the complex rituals. One of the simplest examples are circumcision ceremonies. On some islands, mothers ‘pay’ the uncles of boys to be circumcised. The boys are taken into the bush for weeks, sometimes months, where they are introduced to the ways of manhood – as well as having their foreskins removed. From that point on they no longer run naked, but wear a penis sheath. The price paid to the uncles is in pigs, mats, dances and food crops. And that price cannot be paid unless the mother’s have accumulated sufficient wealth.

In years following natural disasters such as volcanic eruptions (acidic ash rain can damage crops significantly) or cyclones, young boys can reach almost adult age without being circumcised. And they are still treated as babies as a result, until the mothers can once again accumulate sufficient food crops and pigs to pay the circumcisions price.

Although Kava is not a food crop, it is a significant part of Vanuatu cultural society. Kava is a derivative of the pepper tree family. Traditionally it is cut and chewed into a pulp, then spat into a bowl. The mushy pulp is squeezed and the resultant liquid drunk. On some islands, both men and women may drink kava as an evening soporific after a hard days work. On Tanna it has become more ritualised as a ‘men only’ pastime, so much so that women dare not pass near nakamal’s (men’s houses) at the time kava is being drunk, lest they accidentally see the ritual and be punished with a beating.

Because of a long history of inter island and inter village trading, many ni-Vanutau speak numerous languages. Since the arrival of Europeans, a lingua franca evolved. It’s name, Bislama, derived from the Bech-der-mer (sea cucumber) traders. Essentially a phonetic form of English, with much simplified grammar, if it is listened to closely and spoken slowly, it can be understood by most English speaking people.

Despite the introduction of European ideas, the disastrous effects of missionaries and blackbirders and the development of Bislama as a universal language (loss of language being a prime destroyer of primitive cultures worldwide) Vanuatu’s richness and diversity of culture is one of its primary attraction to visitors. Rituals, the obligations of kinship and traditional ceremonies is an integral part of modern life and one that can be appreciated more fully by a visit to one of Vanuatu’s many islands.